The Second Reading of the Immigration Control (Gross Human Rights Abuses) Bill was moved on 15 December in the House of Lords by Baroness Kennedy of The Shaws. The stated purpose is to create legislation that will prevent gross abusers of human rights from entering Britain. More plausibly the noble Lords are entangled – by design or ignorance -in a seedy campaign to fuel Russophobia.

Sergei Magnitsky was a Russian lawyer who acted for William Browder and his company Hermitage Capital Management. Bill Browder’s refusal to bow to the demands of Mr Putin brought state attention to his door and episodes of harassment and intimidation followed. In June and October 2008 Sergei Magnitsky testified before the public investigative committee in Moscow against corrupt officials who were involved in the corporate raid on Hermitage’s offices there which had taken place the previous year. For having the temerity to challenge the power of the Russian state, Sergei Magnitsky was arrested and detained on trumped-up charges… He was eventually found dead [November 2009] in his cell with injuries which were consistent with a final and hellish beating. It beggars belief that four years after his death he was tried—I suppose they would call it a trial in your absence—and convicted, having been posthumously prosecuted by the Russian state. The authoritarianism of Putin’s state reaches beyond the grave. Of course, what it was really doing was seeking to justify the cruelty that had been exacted by it against a lawyer who dared to stand up for the rule of law.

Bill Browder is the only financier and banker I know who has turned into a dedicated, full-on, full-time human rights activist. Since Sergei’s death William Browder has worked tirelessly to secure justice. He has campaigned against the impunity which is enjoyed by the officials who committed those gross acts of inhumanity. Knowing that Russia under Putin will never prosecute those who jailed, persecuted and ultimately killed Sergei, Browder has lobbied and campaigned and urged other nations to deny sanctuary to his killers and to create laws which will deny those criminals the enjoyment of travel, the use of ill-gotten gains and the anonymity that allows them to escape ignominy. So far, he has persuaded the United States and Canadian Governments to legislate, and it is time that we did this, too. This is about creating a Magnitsky law.  At present, the UK has only the asset-freezing aspect of a Magnitsky law. This was introduced when the Criminal Finances Act, which had a “Magnitsky amendment” attached to it, received Royal Assent in April 2017—this year—having passed through Parliament in the preceding months. This amendment allows the Government to apply to the High Court to have the assets of suspected human rights violators frozen. This leaves the United Kingdom lacking a provision for travel bans and explicit naming procedures.

Lord Brown of Eaton-Under-Heywood, a former justice of the Supreme Court,  was party to the passing of the Criminal Finances Bill. At the present reading he recollected:

When I simply mentioned the name Magnitsky, I received by post a copy of Bill Browder’s book, Red Notice. Generally, one never gets around to reading such unsolicited books, but I was tempted to dip into it by the endorsements on the cover. Tom Stoppard called it, “a shocking true-life thriller”,  while Lee Child said: “Reads like a classic thriller … but it’s all true, and it’s a story that needs to be told”. And so indeed it is. Having picked it up, I could not put it down and I finished it with a deep sense of outrage. Subsequently, I lent it to the noble Lord, Lord Butler of Brockwell, who described it as the best thriller he had ever read, and now I have it on loan to the noble Baroness, Lady Chakrabarti.

Browder’s book, Red Notice, is a remarkable read and, since the copy of the noble and learned Lord, Lord Brown, is out on loan, I am happy to offer mine to anybody interested in reading it. It is a terrifying chronicle of what can go on when a regime becomes, as he puts it, “a criminal enterprise wielding all the power of a sovereign state”.

Baroness Chakrabarti, former head of Liberty – and those who take up Baroness Wheatcroft’s offer – will find human rights lawyer, Geoffrey Robertson, also vouches for Red Notice: How I became Putin’s No.1 Enemy .

A fascinating, heart-stopping account of how to take on Putin-and win. It’s exciting to read about Browder’s roller-coaster ride to wealth in Russia, and to learn how his compassion for Sergei Magnitsky, his murdered lawyer, inspired his memorable struggle against the venal apparatchiks of a corrupt state. This is the gripping–and absolutely true–story behind the Magnitsky Law, a signal advance in human rights.

A book that is unlikely to be passed around Parliament is The Killing of William Browder: Deconstructing Bill Browder’s Dangerous Deception . It was  delisted by Amazon in September. The author, Alex Krainer, a hedge-fund manager based in Monaco described what happened:

It is ironic that just today I posted an article about the paramount importance of free speech, which numerous government bureaucracies and large corporations in the West seek to suppress in their purported endeavor to police “hate speech.” And just today one of the great media behemoths, Amazon.com suppressed my book (as I expected they might). I assure you there’s not even a trace of hate or hate speech in my book.The Killing of William Browder is a detailed deconstruction of Bill Browder’s dangerous deception. It shows beyond a reasonable doubt that Bill Browder’s account in his own book (Red Notice) is false. Nevertheless, on the basis of that false narrative, Browder has been able to lobby the U.S. Congress into passing the Magnitsky Act which greatly damaged the bilateral relations between Russia and the United States. Browder himself is on record stating: “I think we are entering into a hot war right now, and that the best possible outcome is a Cold War.” This agenda is obviously important enough that you are not allowed to know the truth about it. 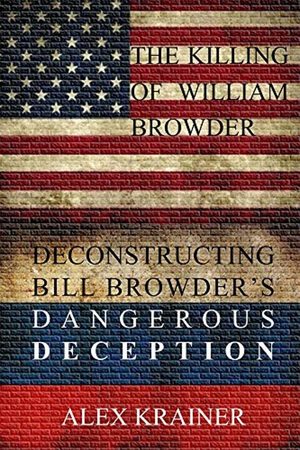 My book, published only last month (August 2017), was starting to get some traction and in its first four weeks gained very positive reviews from readers (seven 5-star reviews and one 4-star review). That’s when Browder’s legal counsel Jonathan M. Winer stepped in. He contacted CreateSpace and demanded that my book be delisted alleging that it contained defamatory content. CreateSpace promptly obliged, suppressing the book and instructing me that I needed to, “work with the disputing party until a resolution is reached.” Once I obtained the “disputing party’s” agreement, I would need to provide CreateSpace a confirmation from both parties so that they may “take action on the title as appropriate.”In other words, CreateSpace “burnt” my book at the request of Browder’s lawyers and obliged me to seek their consent to re-release it. The implication of this is very troubling. It seems that privileged elites may stand above scrutiny and deny everyone else freedom to express opinions that are unfavorable to them.

Geoffrey Robertson says ‘its exciting to read about Browder’s roller-coaster ride to wealth in Russia.” I suspect there’s more interest in how unremarkable individuals could  become fabulous oligarchs almost overnight and repatriate their booty to London.

I read the The Killing of William Browder , several weeks ago, online. Krainer’s  chapter on western institutional and private collusion in the looting of Russia, and what amounts to the murder of millions of its citizens, is rich in detail. Browder provides a compelling case study. Naomi Klein (The Shock Doctrine), David Stuckler and Sanjay Basu (The Body Economic: Why Austerity Kills) have covered similar ground. But Krainer’s argument that Vladimir Putin saved his country from a similar fate to Greece is clearly a counter narrative that cannot be countenanced by the most humanitarian of warmongers.

Krainer says he has proved his case beyond reasonable doubt. Bill Browder claims he has been defamed. Uncritically supporting the Browder campaign to demonise Putin underwrites a possible nuclear confrontation.The most eminent of Britain’s human rights lawyers supported by parliamentary privilege should be able to say why Krainer’s book deserves less credence than they give to Red Notice. For a start it would be useful to establish whether Sergei Magnitsky was in fact a lawyer.

A clue to why this is unlikely to happen is given by Baroness Wheatcroft:

Earlier this week, I was lucky enough to meet Bill Browder. A fellow guest at dinner asked him if he was afraid for his life—a reasonable question, given what had happened to Alexander Litvinenko in a London hotel. But Browder is remarkably sanguine about the possibility of encountering a fatal dose of polonium in his tea.

The Baroness relies on the finding of the Litvenenko Inquiry which last year declared that the Russian state was more or less responsible for Litvenenko’s assassination in London. William Dunkerley followed the inquiry headed by Robert Owen closely.

I don’t know whether or not his murder was ordered by the Russian president or anyone in the Kremlin. What I do know is that Owen’s findings are not supported by reliable evidence. The report relies on hearsay and is marred by inconsistent logic. It offers no factual insights into what really happened to Litvinenko, yet has been taken as gospel truth by governments and pundits across the west.

A recent analysis of the inquiry by lawyer Alexander Mercouris also concludes that its findings are biased and unsustainable.

In reality the facts – if looked at objectively – show the Russian state almost certainly did not murder Litvinenko and played no part in his death. The Inquiry and its report actually say more about the pathological hostility to Russia of some sections of the British establishment than they do about the Litvinenko case. The first point to grasp about the Public Inquiry that has now delivered its verdict in the Litvinenko case is that it should never have happened at all. The second point is that Inquiry’s decision that the Russian authorities were “probably” behind Litvinenko’s murder is unsustainable and makes no sense.

Much the same can be said about the tenor of the Immigration Control (Gross Human Rights Abuses) Bill which has now been committed to a Committee of the Whole House.

As far as I know, London is one of the few cities of the world which has a kleptocracy bus tour, although I understand that the organisers are planning to expand to New York shortly. I took this tour last year with my family, as I saw it as an essential part of my learning and that of my teenage daughter. It was not a pretty sight. I suggest that other noble Lords take this tour—it takes off from Whitehall Place, not very far from here, and takes little more than two hours. It provides a real insight into who owns London, our capital and home to Europe’s largest financial services sector.